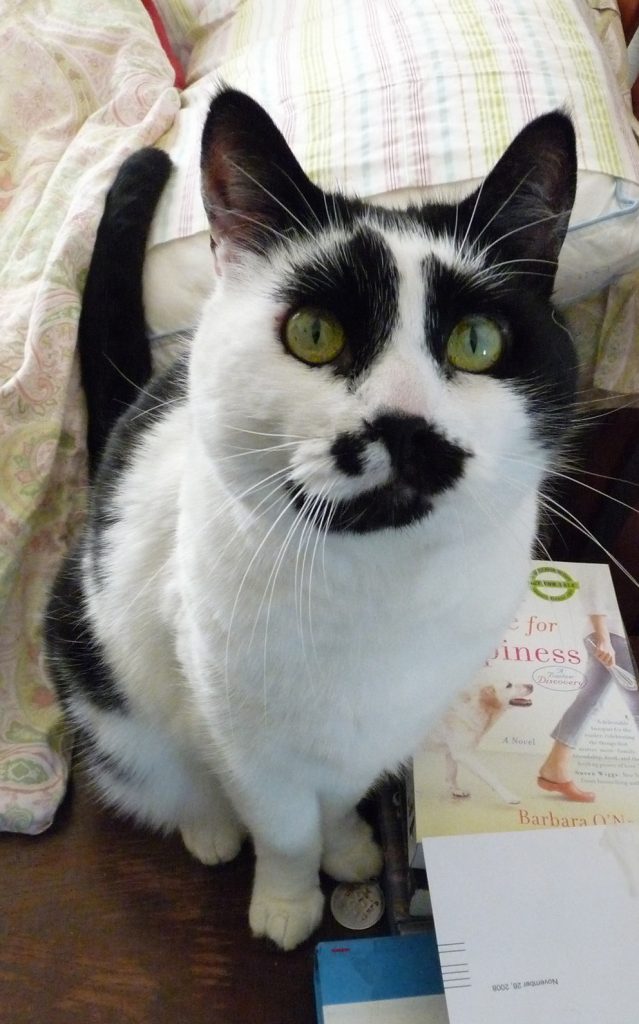 Death is inevitable, of course, and in the case of my beloved old lady, it didn’t come as a surprise, not really. She’d gotten creakier, and skinnier, and greasier, and tireder, little by little, year by year, even though her bloodwork tested normal during her regular checkups. When the vet handed us the dual diagnosis of hyperthyroidism and chronic renal failure in August, it confirmed my worst fears.

The downhill slide accelerated rapidly after that. She lasted longer than Eric did, partly because she actually allowed us to administer subcutaneous fluids, and partly because she had significantly more kidney function left, even at the end. I’m still amazed when I think of the Great Orange Bastard and how muscular and hale he was to his last breath; that kid sure loved his food, which helped mask the fact that his kidneys were more hole than kidney for the last couple of years of his short life. The old lady, on the other hand, was never a glutton; by the time she passed, I could feel every rib and vertebra under her loosened coat.

I did learn some lessons from Eric, chief among them the virtue of letting go before every scrap of hope is lost. The knowledge that I’d left Eric in the hospital, where he died terrified and alone, surrounded by strangers, abandoned by the person he loved most, has haunted me all these years. On October 1, I made sure the old lady was cocooned in blankets and love and whispers of what a good cat she was, had always been, and she purred herself to sleep like she had thousands of times before.

So for all three of you non-Spambots who might maybe check out this site any more, take a look at A Cacophony of Cats, wherein Callisto and Hitlercat air their opinions on all sorts of things.

Ever since Eric’s been gone, Hitlercat, who’s snuggly and affectionate but by and large a pretty independent sort, has become Velcro Kitty with +2 to Squeaking Sadly and +5 to Howling When Left Alone. She quiets down if we bring her into the Forbidden Zones (the zones that Robert and I are trying to keep cat-free as a concession to our allergies, like the game room, a.k.a. the Nerdatorium) and snuggle with her, but right when I come home from school? Oh man. “Squeak! Squee-ee-aak! Mew! Squeak! Mraoowww.” *belly-exposing flop, like, twenty times in a row, complete with curled-up kitten paws*

Last night, however, really broke my heart. She was sitting right by the window, staring out the window intently and meowing and meowing and meowing very plaintively. I thought she wanted love and attention, so I started scritching her head–and then I tracked her line of sight, and realized that she was looking at the neighbor’s cat across the way, who was sitting on the windowsill. She wasn’t pawing at the glass and acting aggressive, the way Eric would when he spotted a strange kitty across the way. She was sitting pretty calmly, tail not twitching, and crying her heart out.

Hitlercat has always liked other cats, even if they don’t like her. I’ve never seen her hissing or swatting at a cat unless they got all aggressive at her first. Her brother was probably the exception–she’d often hiss at him if he got too close and Had That Look In His Eye, but then, Eric, much as I love him, was a grade-A asshole and bully. He’d do things like wait for Hitler to get on my lap and settle in for a good cuddle, and then he’d run over and bite her in the face. But despite their constant sibling squabbling, they still spent all their time together and occasionally snuggled and groomed each other; neither of them had spent any appreciable time alone in their lives. Until now.

I’m going to see what I can do about getting her a new buddy before Christmas. It’ll be good for both of us.

There’s so much I want to post about, such as:

More below the fold! END_OF_DOCUMENT_TOKEN_TO_BE_REPLACED